I just can't sleep tonight.
Tell me, what is it with us women?  Why do we seem to constantly need to pick and criticize each other?  It seems to be a trait particular to us. Why do we seem to take the ministry of getting everybody else straight onto our own shoulders and set about to take everyone else to task?  Why can't we be more kind?  What is it about us that makes us want to sharpen our tongues?
We women are very good at chit chat.  But it's very few friends that one can feel like they can let their guard down and be at home with.  These people are precious.  I want to be more like that.
Posted by Kerri at 4:06 AM 1 comment: 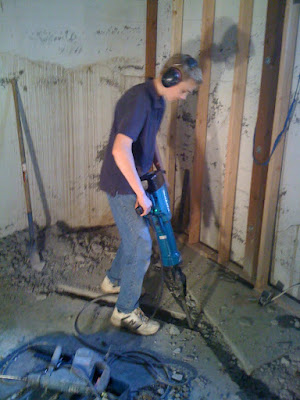 Forrest with a jackhammer.  This is my basement folks! 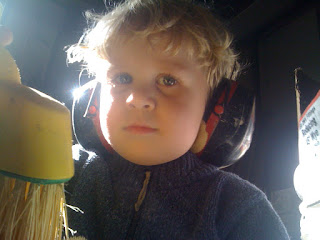 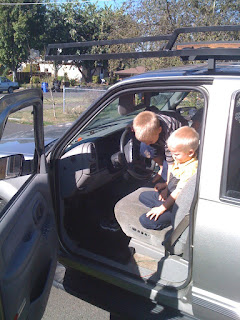 Scott lets the boys climb around his truck. 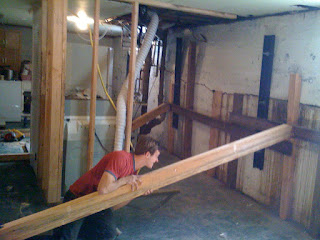 Scott pushing our wall into place..tons of dirt... and all that.. 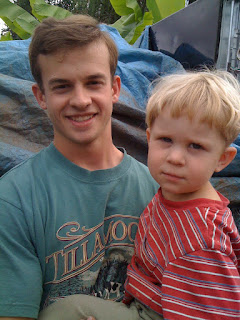 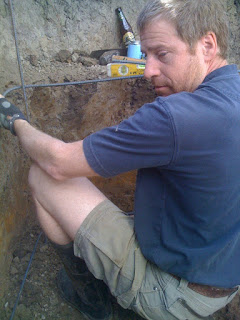 Papa working in the ditch.  This is where our basement stairs will go. 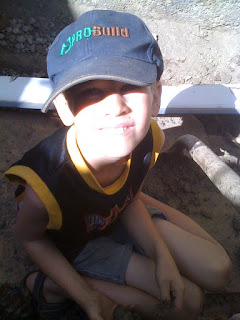 I don't follow any of the educational routes religiously.  But the one that resonates the most with me is the Charlotte Mason approach.  I wish I had done it more with my older kids when they were young.  I especially find her method of narration to be helpful with my boys, to make sure they get what we are reading about.  I will often read them something and then ask them to tell me the story back like I was someone who never heard it before, or tell me all you know about so and so.  I use it a lot with our Bible reading.  Owen especially enjoys narrating back to me.  He is very particular that I write down exactly what he tells me and disputes with himself the best way to put things.  It's fun, except sometime he can go on and on.

We are reading the book of Joshua for our Bible reading, and the other day I asked him to tell me all he knew about the cities of refuge.  Here is what he told me.


I just get such a kick out of that!  Sometimes being a home schooling mom can be such a hoot.
Posted by Kerri at 2:56 PM 5 comments:

The older kids went to a costume party the other night, for a friends birthday.  We don't celebrate Halloween. Our church has a Reformation Night Party, which the kids really love, but it does limit the costume choices.  So they had fun dressing up in something other than historical garb.

Shay was a gypsy, Elisa Wednesday from Adams Family and Forrest was Tracer Bullet from the Calvin and Hobbes comic strip.

This picture cracks me up.  Shayleen looks like she's having a blond moment there.  Shhhh.  Don't tell her I said that.  She hates blond jokes.

Our digital camera gave up the ghost.  About a month after the warrenty expired.  Grrrr.. So I'm saving the change jar for a new camera, but in the mean time all we have is Rand's phone.  It works, but it isn't the greatest for picture quality.

Remember when we were digging up all the dirt on the side of our house?

Well, it's still all dug up, even more so.  There are little trees growing out of that big pile of dirt, and it's pretty much been sitting there all summer.  When your husband is a contractor you learn to wait and be flexible with things being torn apart.  Summer is really busy for him so our house has to take a back seat.  But we also need to get it done before the rain really sets in, so Rand and Scott have been working on it for the past week.  If it wasn't enought ot have the side of the house dug out they are now digging up lines in the basement (For the plumbing for the bathroom we are going to put down there.)  Forrest got to use a jack hammer today.  We took a picture, but it hasn't been uploaded yet, so I'll post it later.

Now my basement is full of little piles of rocks and rubble.  And the boys just can't stay away from the dirt. We've only been getting the bare bones of school work done.  They just have to see what is going on.  Scott is so patient with them and lets them crawl all over his truck and see what he's doing and EVEN took them to Home Depot.  What a guy.  The other evening I came downstairs and Owen was down there helping Rand.  I asked him if he was working hard.  He said "Yep, you know why?"

"Because Scott showed me how."

Kerri
I'm a Christian wife and mother to ten kids and artist. I like to paint, draw, think, read... When I get the chance. This is where homeschooling, family life, art and maybe a book or knitting project collide.

Books On Our Minds