As the weather gets cooler we are reading together more. Reading to the boys is about the only thing that calms their fidgets! Every week I put as much stuff on hold on my library card as I can. They only allow ten holds at a time, but when the stuff arrives at my destination library, they scan it through and I can put more on hold without having picked the other stuff up. I love book lists. I refer to catalogs and lists constantly, especially when I start to notice someone else has the same tastes as I do.

Here are some of the things we've been reading lately. Some worth buying, some are just a "check-out and read a few times" type book:

To the little boys:

The Adventures of Brer Rabbit And Friends

To the kids at lunch I am reading the "Childhood of famous Americans" edition for Sam Houston. Which I can't find anywhere to make a link, so maybe it's out of print. My girls especially really enjoy this series and read these biographies quite willingly.

Letters to a Young Conservative (The Art of Mentoring)

And she really, really enjoyed it. I can tell she enjoys a book when she follows me around the house telling me about it. I didn't read it myself, but she felt that he made conservative arguments quite plain, and maybe more importantly, easier to vocalize and give to others when explaining our view point. Because when have we not been in a situation where someone puts something forth and we don't speak up or defend our own view not necessarily out of cowardliness or uncertainty, but out of not being able to capsulize it into something we can put forth easily and quickly? So based on her reaction to the book, I would recommend it.

Forrest? Computer programming books. Which I have no understanding of, no comment about, nothing to say except, well... I guess someone has to read them. *Yawn*

The Lord bless you and keep you
Kerri
Posted by Kerri at 9:48 PM 9 comments:

Tuesday, is my going out and about day-at least usually. And this week in spite of a wind and rain storm I foolishly decided to keep schedule. We usually use this day to go to the library and run a few errands that take place around the library. The fabric store, the grocery, etc. This week two of my girls needed shoes so we also walked a little out of our way to a strip mall further on so we could go to Payless Shoes as they are having a "Buy one get the next half price" sale. It is a pretty good long walk-maybe a mile and 1/2 or two each way? I'm a terrible judge of these things. But usually it would have been no problem, but I forget that I am pregnant and carrying a bit of extra weight, and it was very windy and rainy.. Well..

I knew when we got home I had done too much. Just feeling very, very run down. And then Wed. I still had basically no energy, but I tried to ignore it and carried along as usual. I was also feeling off, my stomach just didn't feel right. Nothing really big.. I sent all my older kids off to choir, violin and guitar and Rand also went out with some friends so it was just me and the boys.

I really rather enjoy my time with my little boys, when I can really focus on them. They are such nutty little characters. I have been reaching to the back of my brain to teach them some of the Sunday School songs that my older ones learned. Like "Zacheus Was A Wee Little Man"

"Zaccheus was a wee little man
And a wee little man was he
He climbed up a sycamore tree for the Lord he wanted to see
And when the Savior passed that way, He looked up in the tree

*spoken* and he said: Zaccheus, you come down *spoken*

We are also working on a song by Jamie Soles, "Cain and Abel"

Cain and Abel sittin' at the table
One was happy and the other was mad
Abel made a sacrifice pleasing to the Lord
But Cain was very bad
The Lord said "Cain, what's the matter with you?
If you do what's right, I'll be happy with you."
But Cain wouldn't listen; he just frowned
Then he spilled his brother's blood on the ground
Cain was a murderer but so are you
If you hate your brother in your heart it's true
So be like Abel, who trusted the Lord
And not like a man named Cain

And also some scripture memory songs and stuff. They are so enthusiastic about their songs and try to yell them out fast before me or the other guy to show how well they know them. Boys are so funny.

But all of the sudden at 8:00 or so, I started feeling really, really bad. It came on so suddenly and I wasn't expecting it.. Thankfully my older kids got home pretty quickly after so I could leave the boys with them and go to bed. Oh, I just felt awful. All night I felt so awful.

Why did I have to push it? I could have gone today, and the sun is out and I could have at least taken the bus some of the way.. But NNNNOOOOOO!!!

So today I had to make a sad decision to cancel Noah's birthday party with Grandma and a dear friend who also shares his birthday date. I had a ham and presents and everything all ready. Boo-hooo. And big sissy made 3 muddy pies, too. I was lamenting to her, "Oh why did I have to get sick today? And she said because we never celebrate a birthday on the actual date and it would have been breaking tradition. Waaaahhhhh! Well, she's right about that. We never do do the birthday on the day, and one year we did none so we saved them all up and went to Enchanted Forest and called that the "all together birthday year". But it is a bummer to have Noah all excited and everything ready and not be able too.. But we can't get everyone else sick, now can we... I'm still not sure what we will do tonight. Let Noah have his pie and give him his gifts? What to do, what to do.

Today I have been sleeping most all day with an occasional wandering downstairs to see what is up. I remember when I had 6 kids twelve and under-I never could have just hid up in my room and slept all day. The few books I found at the time promised that things would get easier when my older ones got bigger (if I trained them right) no matter how many kids I had, and that has certainly proven to be true.

Well, if Noah has any sort of party soon I will get some pictures.

Oh great, now Zeke has a broken tooth.... Easier was I saying?? 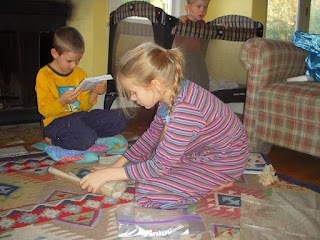 Here are some of the pictures from Reformation Day last week. What a busy time we had of it getting ready! Fiona was my official pattern cutter outer person. 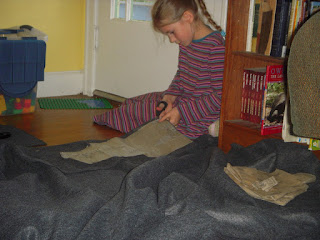 She took her job very seriously. She likes to do these "hands on" type things, and she also likes to feel useful. I guess being the youngest of the three middle girls, she likes to feel like she is an important part of all our projects. :) 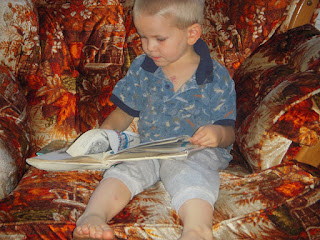 Try to keep the boys from walking all over everything with a book and a designated spot. 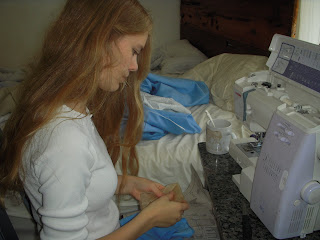 Shay was upstairs working on her dress... 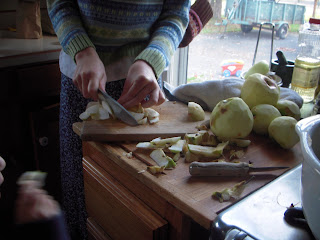 Into this mess Papa walks and sets some home grown apples he got from a clients tree and asks for a pie. Yes dear.. :) 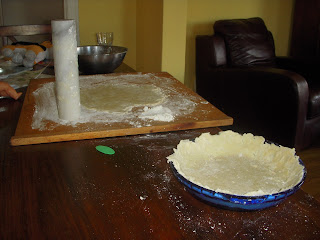 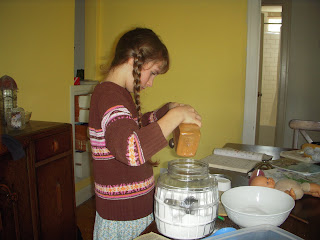 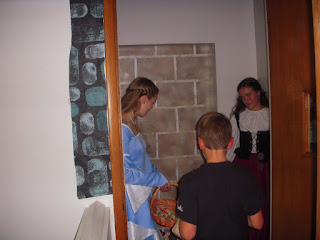 At the church Shay and a friend ran a booth together and pass out candy to the kids. Here they are burning the Papal Bulls that were sent to Martin Luther. 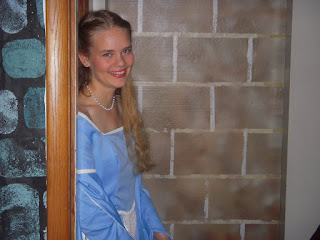 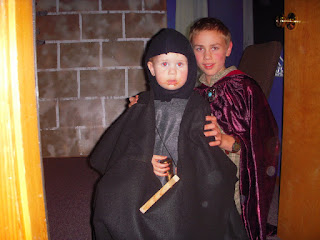 Turn around and look at Mama with your sticky little face Joseph!
And then the camera runs out of batteries. Isn't that the way.
Well, the chocolate is all eaten and the kids are down to the lollipops and such. The wrappers were drifting around the house like autumn leaves, but they are all pretty much cleaned up now. The costumes are packed away and now we move in to real autumn here in the NW. Which means rain. But you know I like the rain, so let it come.
Thank the Lord, I saw my midwife last week and my blood pressure is still holding steady. I'm officially in the last month now, though if things go as they always have before, I will probably have about 6 more weeks.
As for the election.. I got up last night and Forrest was still up doing his math at around 12:00. He told me O Bama had won, (And Shay told him he shouldn't have, he would give me insomnia!) of course I wasn't surprised, but still, having it all official was a bit of a bummer. I read Psalm 37 and decided to take that as my motto and not allow myself to worry. Then this morning one of Shay's friends mentioned the same Psalm to her, so maybe it's God just reminding us all not to worry. Ultimately this war will not be won in the political sphere, and there are many battle fronts. We must keep on, train our children in godliness, pray and watch and tend to the sphere of business God has given each of us and let nothing distract us from it.
The Lord Bless You and Keep you...
Kerri
Posted by Kerri at 2:14 PM 8 comments:

Kerri
I'm a Christian wife and mother to ten kids and artist. I like to paint, draw, think, read... When I get the chance. This is where homeschooling, family life, art and maybe a book or knitting project collide.

Books On Our Minds